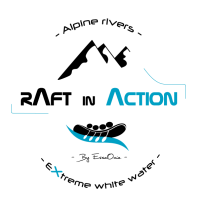 It's our "Best Of" menu, our rafting program for gourmands and undecided who can't choose between dish and dessert and who choose finally both!! And they're right!!

On the program, the best of the two most beautiful rivers of the Northern Alps : the Isere first, with 12 km and 2 hours to be amazed on its beautiful sections of classe IV and its Gorges, then an intense run of 4 km trough the Doron de Bozel, when the water levels are the higher !

Meeting at our base in Centron the Tarentaise valley in Savoy for 32hours of intense activities. Located at 45 min from Chambery, 1h from Grenoble, 1h15 from Annecy.

Sporty people, having no apprehension with the water and wishing to do a sporting descent. Prior experience recommended.

2 departures per day: 8:30 am and 1:45 pm (with reservation ONLY). Meeting directly on our white water base of Centron in the valley of the Tarentaise.

After equip ourselves at our base, we embark on the Isere River for a first warm-up descent, but not only! During the first part of this sailing, the safety and the technique are highlighted in order to make the crew the most efficient possible. But then, let the game be: bumps, 360°, surfs, chandelles, rock-splats... Everything is review during this first sailing, enjoying the Isere River, its landscapes, its Gorges and its jumps! Once at the base, we have a drink, we load the boat on the trailer and 15 minutes later, we analyse the Velodrome Rapid, the entry of our second course, the Doron de Bozel.  And now, we wonder if we didn't give too much during the first part! It'll be tense! But so good! You will have to keep the first 2 km at least: uninterrupted sequence of waves and rolls, I slam, the crew is well synchronized, arms begins to be heavy, but the sensations are right there, and the pleasure to share something together too.

The end of the descent is calmer, we enjoy the light of late afternoon andthe last sensation provided by the river. A program to make you "addict" to the river and the white-water!

For your comfort, we equip you from head to food with quality material :

And when the weather is a little chilly, we add a few more layers :